Fanciful Flair in a Storied Victorian 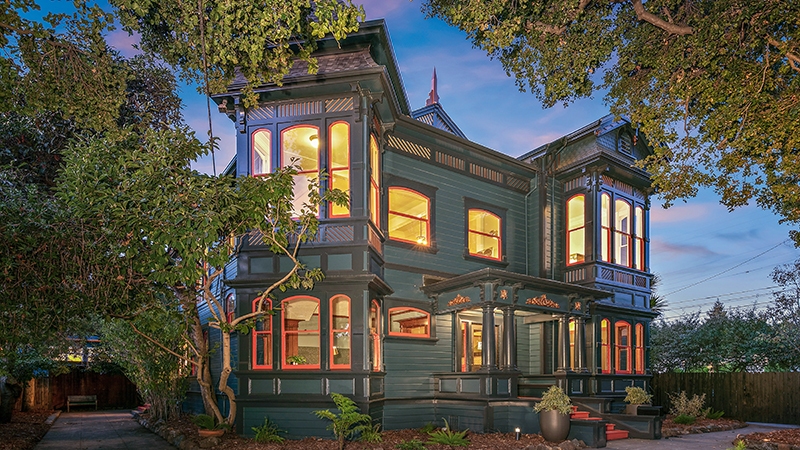 The DeRome house near the Emeryville border is quite a compound.

It’s hard to imagine North Oakland near the Emeryville border as a “rural retreat in the country.” Yet that’s how it was advertised in the 1880s when a new pocket of exclusive homes was developed in the area. It was briefly dubbed “Klinkerville,” after eccentric rubber-stamp entrepreneur Charles Klinker, who promoted his various ventures by happily clunking along San Pablo Avenue in a wagon drawn by jackassess painted with pink-and-yellow polka dots — the jackasses, not the wagon.

One of his properties was a large parcel at 1076 59th St., sold to Louis DeRome, a partner in a San Francisco brass and bronze foundry. In 1885, DeRome built a seven-room Victorian on the site, then remodeled it in 1901 into a dramatic 14-room mansion later described as “whimsical monumentality,” where members of the DeRome family lived until the 1970s.

Today, the neighborhood is called Paradise Park, and this historic site remains a pocket of that paradise amid the bustle of 21st century life. It’s not far from restaurants, shopping, and more, and is a mere mile from the Pixar complex. And if the 5,300-square-foot house was whimsical from the get-go, it’s more so now, thanks to its current owners — a musician and artist — who’ve lived there for the past 17 years, loving the place and adding their own fanciful flair. They also added two separate live-work lofts on the 14,300-square-foot lot in 2003, turning it all into what they consider a “compound.”

It even comes with goats.

“Well, the goats are negotiable,” said listing agent Kathleen Wilson of Red Oak Realty. “Tulip and Banjo are willing to stay on if the new owner is into urban farming.”

Goats or no, Wilson called the property pretty much a once-in-a-lifetime kind of property. “The soul and the magic of this place is infused with the owner’s persona,” Wilson said. “She painted it these beautiful jewel-tone colors inside and out. She is a musician; her ex-husband is an artist, so as you walk through the house, you can just feel that kind of creativity.” 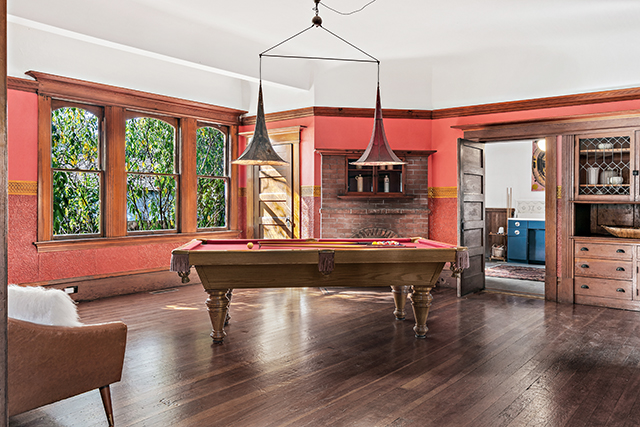 This is not your cookie-cutter property. The main house is three floors with seven bedrooms, a billiards room, more than 80 arch-top windows, Corinthian columns, four fireplaces, and an attic atelier reminiscent of a Paris hideaway. Though remodeled and updated last year, there’s history in every nook and cranny, each twist and turn.

The owners cherished some of these special spots, writing about them in a letter to prospective buyers: “The early morning glow of the kitchen. Basking in the golden afternoon sun at the top of the stairs. Climbing out onto the roof to watch the fireworks at the Fourth of July.”

Set back from the street amid a cluster of oaks, the exterior is true Victorian splendor with its front portico, bay tower with a witch’s-cap roof and seven gables — each adorned with a bronze metallic spire and drop-finial. Walls are colored in slate and sapphire blues with a muted ruby trim.

The history lesson starts at the front door. After the 1906 earthquake, DeRome moved his foundry to the property where his company cast many well-known bronze monuments, such as the Donner Monument at Donner Lake and the bronze doors at the Doe Library at UC Berkeley. It’s where he also cast the home’s unique bronze front door.

In the foyer are original doorframes, beautiful wooden staircase, and new embossed wallpaper of the period. Off the foyer to the left is the only bedroom on this floor. “One of the DeRome family relatives came to an open house and told us that was the ‘fainting room,’” Wilson said. 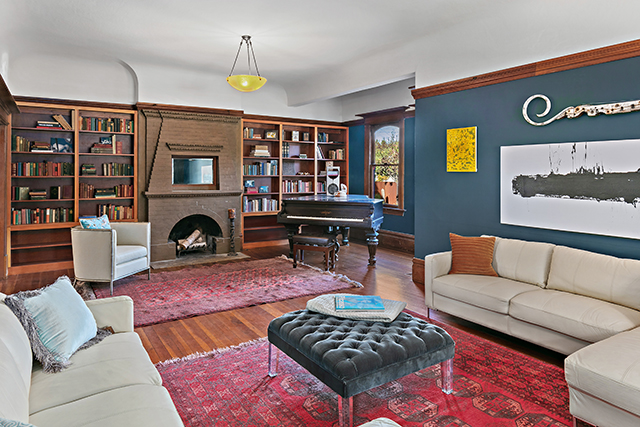 Off to the right of the entry and through original pocket doors is the spacious living room with a dramatic brick fireplace flanked by built-in bookcases. Walls are painted a deep gray beneath the picture rail and cove ceilings. There’s a front nook of windows.

Next up is the formal dining room — currently set up as a billiard room in muted ruby tones with custom light fixtures made from gramophone speakers. There’s another brick fireplace and built-in breakfront. Off that room is a small niche behind the fireplace, made into a full bath with a large hand-hammered copper soaking tub.

Through another door is the breakfast room and kitchen with yet another fireplace. It’s a lovely open space for family breakfasts or late-night gatherings. There’s a walk-in pantry and a bonus room, which was originally the “butler’s” pantry.

The kitchen has soapstone countertops, a deep copper sink, modern stainless appliances, and a custom butcher-block island made from reclaimed original cupboard doors. Glass doors lead out to the sun porch and side yard. There’s also a second staircase here to the upper levels. 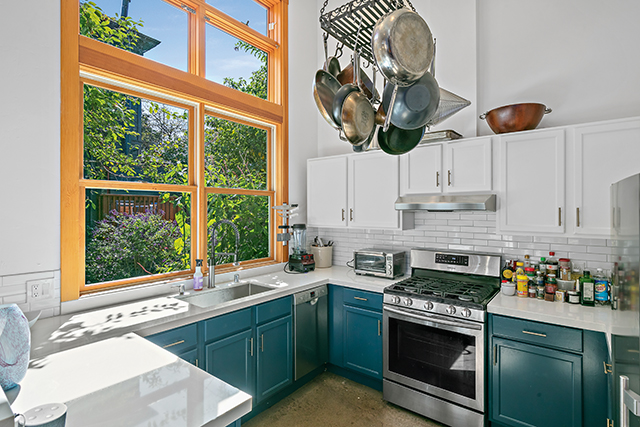 “You walk in this house and, while it’s very historic and grand, it’s also very hip and vibrant and modern,” Wilson said.

Take the main staircase off the foyer to the second level and a large space used as a family room. Painted dove-gray and white, it glows with natural light from a wall of windows and a corner bay window with another reading nook.

Five bedrooms feed off this space, each with their own nooks, arched windows overlooking the grounds and the neighborhood and ornate moldings over every arch or pass-through. The master bedroom has a separate sitting room and fireplace. The baths are not large, but well-appointed with classic details and modern features.

The top floor is where you’ll find the attic atelier in fresh white with wood beams at the ceiling peak. It’s considered the seventh bedroom but would be perfect as an artist’s studio. 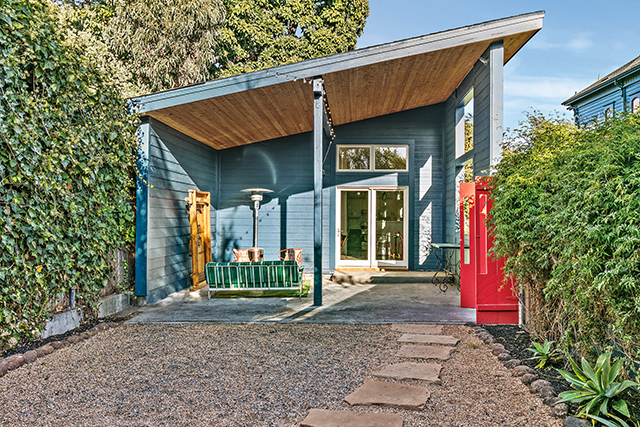 Out on the grounds, the outdoor spaces have received as much love and attention as the inside of the mansion. There are sunlit paths, butterfly gardens, fruit trees, and multiple gathering spaces. Just last year, the owner installed a custom steel fence with a weathered patina that delineates the main house from the lofts.

The lofts, painted in the same jewel tones of the main house, have separate entrances and addresses — at 5925 and 5927 Herzog St. The one-bedroom unit is 1,060 square feet, and the studio unit is 645 square feet. Both units have sleek modern kitchens, polished concrete floors, high ceilings, and French doors to their own private garden spaces.

“This is a house that, when you walk in, you really get impacted by it,” Wilson said. “There aren’t many properties where jaded real estate agents get goosebumps when they walk in.” 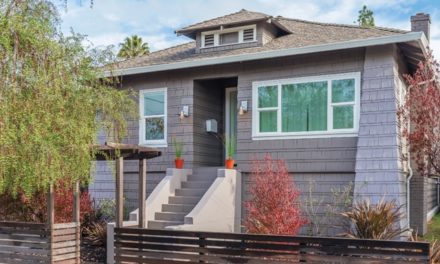 Is the East Bay Housing Market Really Cooling Off? 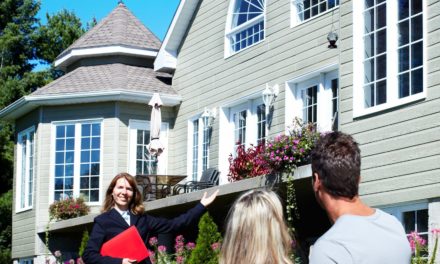 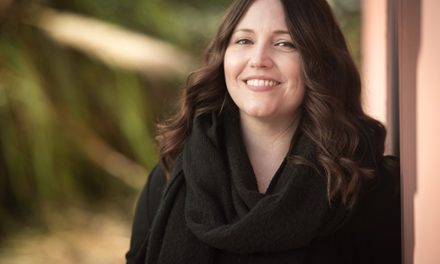 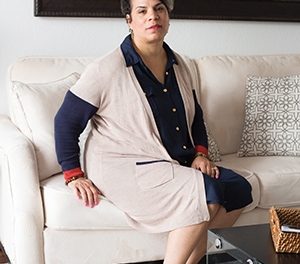